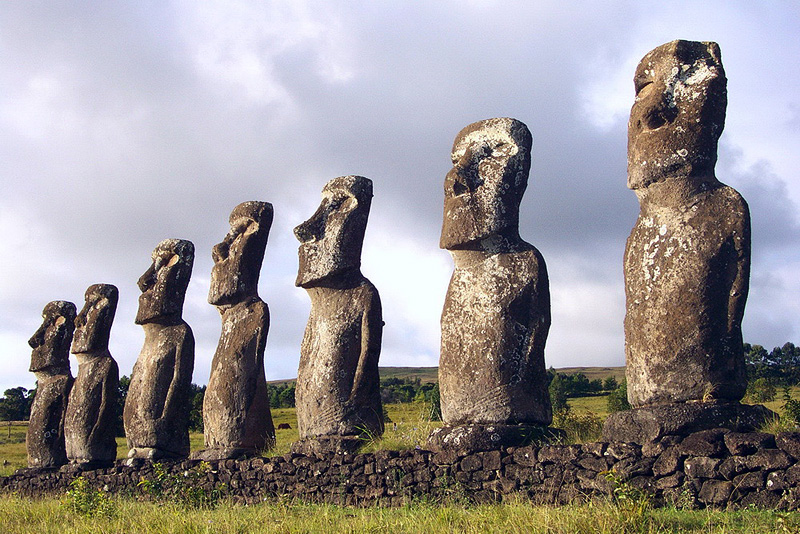 Secrets and mysteries of a magic island

Many myths and legends have formed regarding Easter Island. It is located in the middle of the Pacific Ocean. Having a rich history that has been lost and little known up until today. We embark on a mysterious journey that takes us back in time to a culture that still today offers more enigmas to the scientific world. This volcanic island hides many secrets and treasures and, of course, unique natural landscapes. The local inhabitants maintain a very strong connection with their ancestral culture and heritage. This helps keep alive their old traditions and ceremonies making each trip to Easter Island a magical encounter with the past. This place is one of the world’s wonders. No other inhabited place is more isolated than Easter Island. An island in the Pacific Ocean that forms part of Polinesia and is under Chilean rule. All of this is precisely what gives Easter Island its authenticity and mysterious charm. It’s time to come and discover the secrets behind this island.

We offer this trip only as PRIVATE SERVICE, but not on fixed dates

The dates for private trips are requested by the participants. In general it is not possible to add external persons to the group. If required, the itinerary can be adapted to the group´s needs and priorities.

The price depends on the number of participants, and they are based on a double room.

After landing at the Mataveri airport at Hanga Roa, the only town found on the island, we will be met by our local SPONDYLUS guide with the traditional collar of flowers. From here we will drive to our hotel and discuss the details of our trip for the next following days. Free afternoon. Hanga Roa is the center of life on Rapa Nui (Easter Island) and a meeting place for nature and culture lovers from all over the world. One could enjoy a walk through the village streets, and arrive at the small fishing port. A number of restaurants invite us to learn about and enjoy the traditional local Polynesian cuisine. After a fantastic sunset, we will enjoy the first night of our trip in this mystical world of Rapa Nui.

DAY 2: RAPA NUI / THE MOAI ROUTE AND THE ANAKENA BEACH

When one thinks of Easter Island, immediately we visualize the image of enormous sculptures: stone heads with long characteristic noses and big ears. They produce an impressive and also strange sensation in the onlooker. Thanks to them, Easter Island is known worldwide. There are hundreds of stone statues that are called Moai that measure up to 20 metres and are scattered around the island. The exact age of the figures, and the reasons for their being are still controversial and produce much speculation. As a general rule, they formed part of an Ahu, this is a sacred ceremonial site. During our day excursion, we will experiment all of this directly on site. We will start with the route of the Moai and finish the day on the famous Anakena beach. Firstly we will visit the Vaihu site, here we will admire the first Ahu with its enormous Moai. Then we will visit the Akahanga Ahu. According to tradition, this place takes the name of the first king of the island, and as legend goes, he is buried here. Then we travel to the Rano Raraku volcano with its spectacular crater. It is believed that most of the huge statues were carved here. Also the largest stone statue was carved here, and can still be found and seen in the old quarry. 20 meters long and almost 200 tonnes, this is a real giant but it was never finished. After the quarry, we will visit the Ahu Tongariki, this site has a total of fifteen Moais. A tsunami in 1960 hit the island and damaged the site, destroying some of the statues but a few of them were returned to their original position. Finally we arrive at Te Pito Kura, an ancient abandoned settlement. Here we will see the mysterious round Rock found on the Anakena beach, and also have a bit of free time at the end of the day. The white sand beach along with the turquoise coloured water, invites one to go for a swim and relax. During the evening we will return to our hotel after a busy day.

Today has been especially designed for nature lovers. After a hearty breakfast, we will drive to the ceremonial center of Tahai, the start of our trek. After passing the old town cemetery along the coastline, we head for the volcano Rano Kau. On route, we will stop off at the Ana Kai Tangata cave. Here the islanders used to find refuge in times of conflict. The roof of the cave is covered with a number of very interesting rock paintings that bear witness to the past. After the cave adventure, we slowly start climbing up to the edge of the crater of the Rano Kau volcano. We are rewarded with amazing views from here. The deep crater is covered in a rich vegetation, and also houses a lake full of bulrushes. The mix of colours from this view point is fantastic. Our next stop is the ceremonial village of Orongo, located 300 meters above sea level. Here the cult of the “birdman” or Tangata Manu was practiced. This ritual consisted of an annual competition involving the young males of the island to collect the first sooty tern egg of the season from the islet of Motu Nui. They would have to swim from the main island across to Motu Nui, then climb its cliffs, and find and take an egg from a nest, then swim back to Rapa Nui. The first competitor who returned with an undamaged egg to Orongo, was the winner and was bestowed with fame and honour. On the way back to the hotel we have one more stop. We will visit Ahu Vinapu, this site has not been restored, and is still in its original state.

Easter Island is a volcanic island and is about 2.5 million years old. It formed when the underwater Poike volcano (this is now the eastern side of the island) surfaced. Then about 1.5 million years later, the Rano Kau volcano also surfaced, approximately 20 kilometers to the west. Then round about 240.000 years ago, the volcano Ma’unga Terevaka surfaced, and over time merged with the two volcanos producing the island as we know today. Ma’unga Terevaka is the highest point of the island with 512 meters above sea level. We want to visit it! From Vaitea, the gentle ascent leads us through an area of small lakes before arriving at a eucalyptus forest. From here one needs approximately 1.5 hours to reach the highest point of the island and we are rewarded with an amazing view of the whole island. The summit of Terevaka is covered with a grass vegetation. The harmonious view is complemented with a number of small craters that decorate the summit. On our descent, we will pass by a crater that is located on the right hand side of the path. It is possible to walk around the crater in just a few minutes. Shortly, we will arrive at an intersection below the same crater, and from here the path leads us straight down. We will pass a small stone wall and after another 30 minutes we will start to see the impressive Moais of Akivi. A little further on we arrive at a lava cave. From this spot we get a great view of Terevaka. Not too far from here, we will arrive at the starting point of our circular trek. The rest of the afternoon is free for us to do what we want to. (Duration of the trek: approximately 5 hours.)

After breakfast, we will take a transfer to the airport. END OF SERVICES

To guarantee maximum security, all along the trip we always take with us, a first aid kit and medicine for emergencies.

Besides this, we strongly recommend every participant to hire a Foreign Health insurance and an Accident insurance for South America.

Climatic conditions and other factors of force majeure can cause changes in the trip program. Responsibility and decision making in this regard rests completely and only with the SPONDYLUS guide in charge. The security of our clients, our mountain guides and the whole expedition team is our highest priority!

N04 / THE MAGIC IN THE HEART OF PATAGONIA